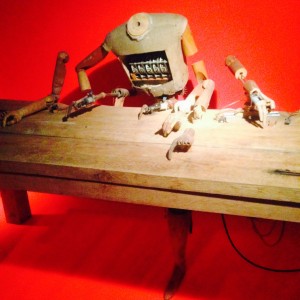 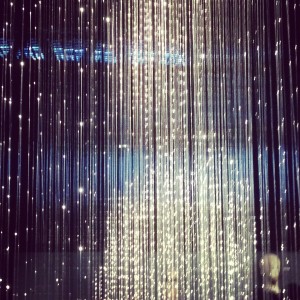 There is a place for contemporary art in Quai Branly, museum which shows ingenious art and culture. Persona is an exhibition which tells anthropological story using artistic means.

I would never have thought to go to Quai Branly in search of contemporary art, but my teacher at Ecole du Louvre advised us to check out this exhibition. The main goal of Persona is to show a permanent two ways link between human beings and objects created by them.

First image in the post is an installation of a robot with extensions hands and inside calculator. It appears inanimate at first sight, but then it starts to move it’s multiple hands and fingers and to clack numbers inside. Even the table moves from right to left. Not only it makes think of human beings who become and act more and more like working machines, but also of robots which take over little by little our place in society. There are plenty of such robots in the show.

Second is an installation made from optical fiber by artist Roseline de Thélin. From one perspective it is “just” a sculpture made from plastic fiber with primary goal to transmit light or data. However, in human imagination and unconscious it became an image of an extraterrestrial Persona. Don’t you think?

There is a fantastic video showing space images (see below photo).  Space has always been a source of inspiration and attraction for scientists, artists and writers. My friend who accompanied me that day confessed that it is her greatest dream to go the space. That she admires the endless of Universe and cherries day dreams to be one day up there. I do not necessarily share this attraction to be in the space, but I really admired the video and the idea to see the space!

Last image to comment is a set of instruments to hunt ghosts, believe it or not.  As if the creators of strange Persona tried to give us also a remedy to hunt phantoms from our lives, of course if we wanted to. 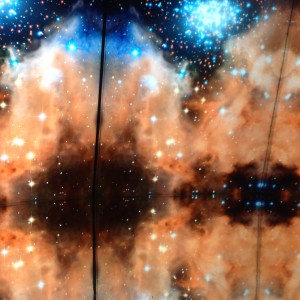 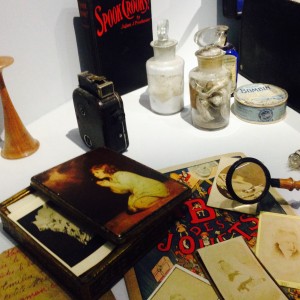