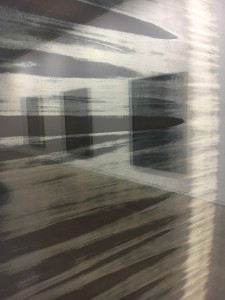 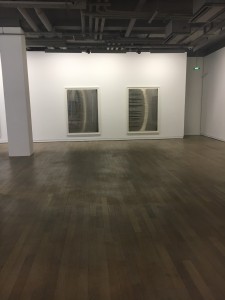 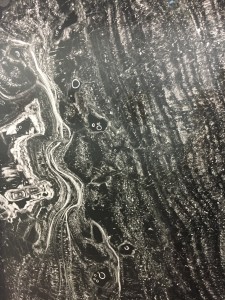 Graphical, mineral and history-digging, this is how I would describe this exhibition by Dove Allouche at Ricard Foundation.

This was my first time at Ricard Foundation. It is situated in the heart of Paris, steps away from rue Faubourg Saint-Honoré, Elysée palace and Buddha-bar.  The principle of foundation is genius – promote young and emerging artistes. It looks like a big gallery space inside, while it has not commercial intention, but only promotion and education in arts. Foundation regularly organizes conferences and debates.

By the time I went there, there was as exhibition by French artist, born in 1972, Dove Allouche. Dove was already exposed in Palais de Tokyo and in Centre Pompidou. He works very often with black and white colors, playing around graphical patterns and using photography as an instrument. This time he plunges into atmospheres of caves, prehistorical man and transmission.

His artwork in this show appears to recall the natural layers of earth, like a memory which is graved in our cells. As if he sliced down history of our planet and found -out what had happened during thousands years ago during prehistory. Mother-nature seen through x-rays machine.

The glace covering art works reflects the space, the other artworks and of course the Spectator, thus recalling gently that often in the past we could found our present or maybe our future.

I think we should follow Dove Allouche in the coming years. Not only because such important institutions show his work, but because his work has a strong visual power on the one who sees it.