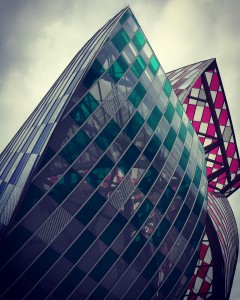 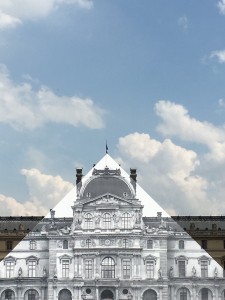 What could possibly be in common between Daniel Buren & JR artist aside that they are both French? Daniel Buren is a well-established and having had a fabulous career 78 years old artist. While JR artist is 33, he comes from street art, his art is very trendy and his career is picking up like crazy (during his last year opening at Perrotin it was impossible to get into the gallery). Well, the common point is that they both decorated a famous art related building in Paris. Buren enlightened Foundation Louis Vuitton and JR artist took care of Pyramid of Louvre.

Daniel Buren artwork is called Observatory of light, and I really advice you to go and see it in a sunny day, because it creates fantastic reflection of different colors. Not to forget that the building of Foundation Louis Vuitton was designed by Frank Gehry a super famous starchitect. But I must admit that the dialogue between artists is so natural and honestly speaking I prefer the Foundation in this way. Let’s say it is more fun. So I hope it will stay there for a while. 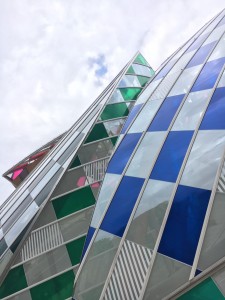 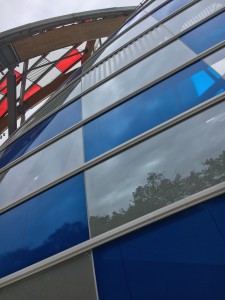 And JR artist played well with the Pyramid of Louvre which was designed back to 1989 by Ieoh Ming Pei, another super architect, who will turn 100 years old next year. If you find the right spot, the Pyramid will literally disappear, you just have to align the photo of the Louvre which is on the Pyramid and the Louvre. I think some people were still reluctant to the modern architecture and were not fun of the Pyramid – they might be smiling now. Also, now days with floods in Paris Le Louvre is closed for security reasons, but at least you can go and see the installation of JR artist and take pictures from different perspectives. By the way, I like this Pyramid with or without JR installation.