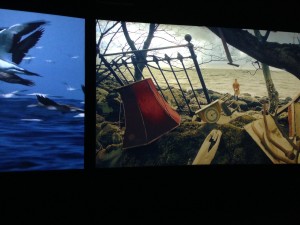 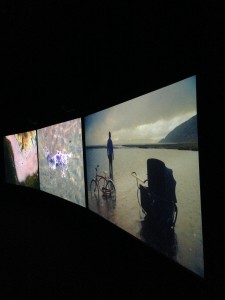 It may appear strange enough to show a picture of a video, but really every frame of this 3 screens video called Vertigo Sea by John Akomfrah is a standalone image. I was captured by a high tide of sea samples. Some of them are beautiful especially those showing underwater life from BBC documentaries. Others – are less glamourous, visioning fish poachers doing terrible things they do. And part of the film is fictional telling stories about the people’s desire to risk their life and cross the ocean to search for better life (very actual for year 2015 with massive migration from Middle East and Africa). So basically, my feeling was when I went out of the dark room after exactly 48 minutes and 30 seconds … The Sea is the magnificent source of life and hope, so we need to take of it and preserve it for us and for future generations. 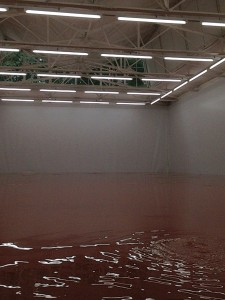 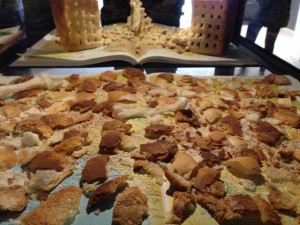 Swiss pavilion was flooded by Pamela Rosenkranz and I strongly believe that this artistic global warming warning. She might quite probably be right. Even though COP21 found an agreement to stabilize our planet’s overheating at 2°, the nature laughed and showed December with 10 higher than usual.

In Australian pavilion, the message is pretty solid as well. Fiona Hall composed with dry bread on a map. Buildings, bones, ruins … it all makes a suggestion about the challenge to feed couple of billions people. Not an easy tasking, we must acknowledge. 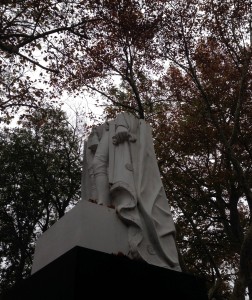 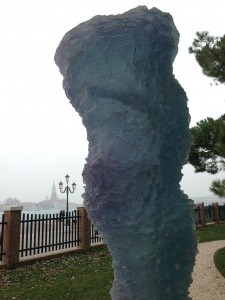 Finally, here are some hints about outside installations. In Giardini area, there were sculptures by Raqs Media collective. Or should I rather describe them as half sculptures, because each sculpture was missing a part of the human body it represented. On the picture above, there is a half man on the pedestal. Coded message? Do we all leave half life to the point monuments are erected without us noticing something is missing?   In the garden called Giardino della Marinaressa, facing the waterfront there were 6 sculptures by Ursula Von Rydingsvard. They were perfectly matching the nature of the garden, the trees and grass with its mineral substance, and also they were in harmony with the town of Venezia. So I guess the final message here is that we need really to be close with the nature to leave in harmony with ourselves and our urban environments.

Farewell, Venice! See you in 2017 and will observe where we will be by then …

Biennale Venezia 2015 – All the World’s Futures