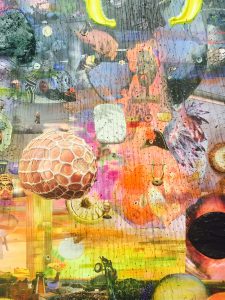 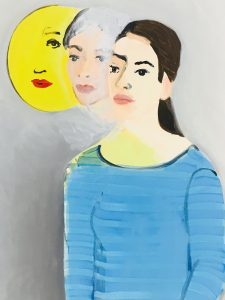 Art in Miami in December is by far the most large and exciting art entertainment.  Over 4 days – you can visit 20 art fairs, 5 private collections, multiple museums, galleries and art spaces. I would still put Art Basel Miami Beach (ABMB) as number one of all fairs in town during that period. All blue chip galleries are in ABMB and you can experience artworks of most important artists of the present and the past.

The first artwork on the left top is by Elliot Hundley from Los-Angeles, represented at Andrea Rosen gallery. It was also the first one I saw when arrived at the vernissage of Art Basel Miami Beach. And at this point I understood that the quality of work will be extremely high. Aside an interesting and colorful assemblage that painting was filled with needles, which I interpreted as an acupuncture applied to art, healthy start of the fair. The second on the right top is by Becky Kolsrud, also from Los-Angeles, represented at JTT gallery. I like portraits as the genre of painting in general, and this one specifically attracted my attention, because it was simple way to show the relationship that a woman has with the moon and it’s energy. There is a moon, there is a woman, and there is a spectrum between the two, which I guess we could call an unconsciousness. It is interesting that I selected 2 artistes from Los-Angeles on the top, from 2 New-York based galleries, although one gallery is in Chelsea (Andrea Rosen) and the other in Lower East Side (JTT), the current point of attraction for art galleries in the city. 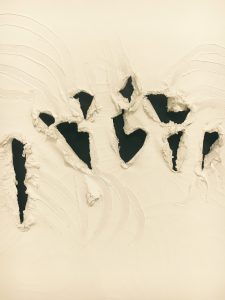 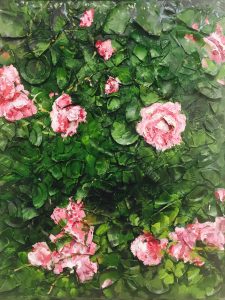 The next couple of artists that I put together on this page is an Italian Lucio Fontana and an American Julian Schnabel. I have decided to show Fontana here, because it is first of all not a usual one with vertical cuts that the artist did. These holes on canvas made me think of hearts. It turned a violent gesture into something smooth and lovable. And a common point with Fontana of the Schnabel painting is that it is not made on a canvas but on a broken plates which were put together. So the parallel here is that the violence is transformed into peace and flowers. 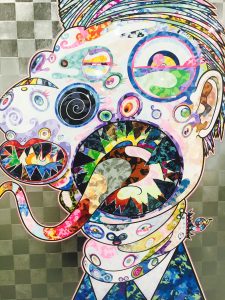 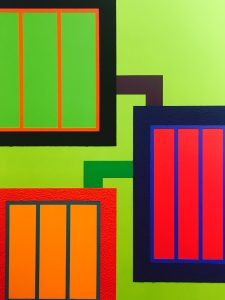 My next “curated” pair is Peter Halley and Takashi Murakami. Murakami is one of the most important contemporary  Japanese painters. He gets his inspiration from manga and pop culture. Usually we see smileys and flowers for his paintings, but this time Perrotin gallery decided to bring a monster to Art Basel Miami Beach. Maybe he got inspiration from Le Cri de Munch? Peter Haley is also a colorful painting, but rather geometrical. I can see there crossings, connections, windows, transformations and transitions from one world to another. 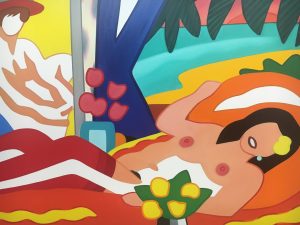 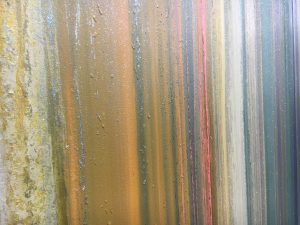 And to finish above is a classical Tom Wesselman  and John Armleder. On Wesselman’s painting we could not really see thef ace of the woman, but we guess that she is happy and enjoys the time in a sunny place. And the painting of John Armleder emanate a powerful light which attracts the spectator by it’s mineral illumination.

I could not unfortunately shows all fantastic artworks that I have seen. I went to Art Basel Miami Beach twice that week and I’m not sure I have seen everything, there were almost 300 galleries present and let’s say 3000 artworks. Most of them were paintings, which I believe is the most easy and commercially attractive to bring to a fair. Lot’s of color, lot’s of big names, but also younger artistes and galleries. I definitely recommend to drop by Miami next year beginning of December, especially if you want to escape the winter time.

My next post will be also about Miami: art private foundations. Stay with me.